Face down in the frigid blue, I dangled between continents. The water, which seemed to grip my brain like an ice-cream headache, was crystal, allowing clear views of the fissure below. I flippered forwards, cresting a sub-aqua ridge where, suddenly, the turquoise plunged to a more ominous navy, hinting at a fathomless abyss. I was so startled I spat out my snorkel and lost all form; my buoyant dry-suit spun me round, and returned me to the real world. Bobbing helplessly with my back to the bowels of the Earth, I was glad to see Iceland – mountainous, treeless and surreal – was still there.

Everything about this escapade was absurd. The air temperature in Thingvellir National Park hovered around 5C, the waters of its Silfra Rift 2C – natural, then, to don a padded onesie and neoprene babygrow, and jump right in …

Thingvellir, in Iceland’s south-west and less than an hour’s drive from Reykjavik, is the country’s most important cultural site. Parliament was established here in AD930. But it is also where the Eurasian and North American tectonic plates meet and I had just snorkelled in the chilly limbo in the middle.

My base was the recently revamped Hotel ION, just south of the national park, and plum inside the “Golden Circle” tourist circuit. Unveiled in February, not only is ION heavy on style – walls of wood and smoothed concrete, Scandi-chic furniture, big murals, an Icelandic soundtrack – it also claims to be the country’s first adventure hotel. If swimming between continents was anything to go by, I wasn’t about to argue.

“It’s mainly our location,” the receptionist replied, when I asked what an “adventure hotel” might be. Certainly, ION has quite a spot: so accessible from the capital, yet away from light pollution; out in the wilds, amid lava fields and snow-streaked mountains; wonderfully isolated – save one unusual neighbour …

“It’s great to be by the geothermal power station,” she continued. “It provides our energy.”

Before it was a hotel, the older part of ION was built to house the employees of Nesjavellir Power Station, whose steaming turbines came as a shock when I arrived in this otherwise pristine wilderness. But, actually, the plant is a source of pride – Iceland leads the world in geothermal technology. And it is Nesjavellir’s workers who mapped out the hiking trails that lead right from the hotel’s door.

The power station doesn’t intrude on the hotel’s Northern Lights Bar either. Although one side of this dimly lit glass-walled den overlooks an access road, station staff will turn off their streetlamps should the aurora start to dance. Sadly, despite me keeping vigil in the bar, as well as in the hotel’s al fresco hot tub, the Northern Lights didn’t come out to play on my visit. Still, it’s a good excuse to return this autumn, which Nasa has predicted will see solar activity peak.

And there was plenty more entertainment. Iceland is a geologic pleasuredome. This youthful island, only about 20 million years old, is constantly spewing, simmering, changing and creating natural features that lend themselves to thrilling pursuits. In this region alone, there are waterfalls to walk behind, slopes to snowmobile, caves to probe, volcanoes to climb and rivers to raft, kayak, or ford in SuperJeeps.

My next adventure was to take a stroll on Solheimajokull. “In 2000, it used to reach to the car park,” my guide, Gulli, explained as we now had to walk 500m or so to the glacier’s terminal edge. Helmets and harnesses on, we stamped onto the ice, walking like bow-legged cowboys so as not to stab ourselves with our own crampons. It was a dreary day but, like Scotland or New Zealand, there’s a drama to Iceland that’s almost enhanced by bad weather. The glacier, marbled with ash deposits and scored with crevasses, twisted up into its broody mother mountains; to the side, green valleys dripped with waterfalls, empowered by recent rain.

Gulli kept me safe and informed as we crunched about on Solheimajokull’s surface. He pointed out moulins (circular shafts) at varied stages of formation and led me into a sheltered bowl of sparkling blue-white that looked gouged by an ice-cream scoop. A good guide adds so much more than protection. But part of Iceland’s appeal is the refreshing lack of health and safety mania. There are no ugly barriers to nature: the rules of common sense prevail.

I certainly wouldn’t have attempted my final tour alone. As twilight descended over the troll-like knobbles of Stora-Bollahraun lava field, I followed guide Ingo into the centre of the Earth . Leidarendi (End of the Journey Cave) is a 2,000-year-old subterranean lava tube. Exploring with only Ingo, three Swedes and the odd plink of water for company, it felt like another world.

Our headtorches helped us to find safe passage amid a vulcanologist’s rapture of formations. Lava teats dimpled the roof; a silica-flecked ceiling glittered like a canopy of stars; fragile stalagmites grew from the rubble, and rocks came in purple, black, yellow and rich red. At one point the cave narrowed to about 50cm high, forcing us to crawl like Indiana Jones escaping a boulder (only with less panache and harder hats). Then we sat in a chamber and turned off our lights for a moment’s silent contemplation of the complete darkness.

I remembered this moment back at ION, my body cosy, my ears soothed by Icelandic folksters Of Monsters and Men, a delicious Arctic char, plucked from nearby Lake Thingvellir, on my plate. I pressed my face to the window: mountains, lava fields but, alas, no Northern Lights. An adventure for another night, perhaps.

Iceland specialist Discover the World (01737 214291; discover-the-world.co.uk) offers three-night Hotel ION packages from £781 per person, including return flights from Heathrow to Reykjavik with Icelandair, accommodation with breakfast and entrance to the Blue Lagoon; also included is either a Northern Lights Safari by SuperJeep (October-March) or SuperJeep Midnight Sun Safari (April-September), both of which also involve lava-caving and a lobster dinner. Additional excursion options include the Golden Circle Safari with Snorkelling (from £200pp) and the South Shore Safari with Glacier Walk (from £195pp). 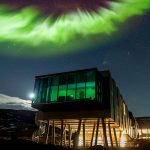 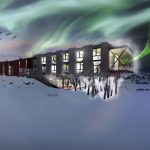